Fire sentries are sentries that fire beams of fire. This will cause damage to a player as would Lava Blocks, but because it is continually firing the damage is potentially increased. Once a player escapes the Sentry's range, the player will still feel the affects for about 2-3 seconds before wearing off. 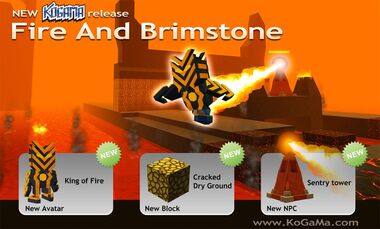 The Fire Sentry Tower was released alongside the King of Fire avatar and Cracked Dry Ground material as part of the Fire and Brimstone Update on October 17, 2012.

NOTE: Got deleted because of a minor unknown reason.