Back to page
Edit

This logic tutorial will show you how to create a button that alternates between 4 outputs. Only one of the four outputs is active at a time. Required Logic Cubes:

To construct the system, recreate the logic circuit as seen in the image. All important connections and boxes are in view; you may ignore any wires that go off-screen. 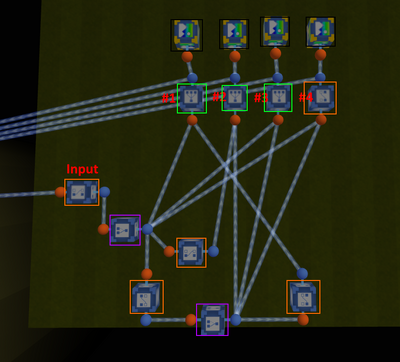 Input Cube: Connect the negate cube marked "Input" to a pressure plate or target trigger.
Numbered Cubes: The cubes numbered 1-4 provide the system's output. The cube marked #1 is the first to be activated by the system, the cube marked #2 is the second to be activated, and so on.
Outputs: In the example image, the 4 output cubes are skyboxes. Each time the system is activated (by, say, a pressure plate), a different skybox is turned on. You can replace the skyboxes with other cubes to fit your game's needs.

This system allows for a pressure plate or target trigger to alternate between 4 different outputs, with only one output active at a time. This 4-state system can be used for a variety of things: