The News is a section that can be find on the KoGaMa Website. In it, Developers and Community Managers can announce different things to the community, such as new Seasonal Events, KoGaMa Updates and new content, or other kinds of posts related to the Community, like Weekly Highlights or Community Roundup. 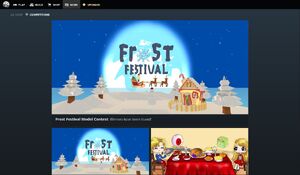 The Competition Tab is a section that can be found on the News page. In it, all posts related to KoGaMa's Seasonal Event Contests are posted here.

On Nov. 7th 2012, the first news article was posted online, the news explains the updates that have been added at that time (this includes the ice tower npc, bionic penguin and zigzag block).

On Dec 30 2012, the news announced the addition of selling and reselling models which caused a HUGE impact on the community.

On Feb 13 2013, the news explained the addition of A Profile and the shop.

On Mar 12 2013, the news announced the addition of a very popular item, the Cubeun.

On Apr 6 2013, the famous checkpoint flag update was explained by the news.

Sometime in 2013, the KoGaMa team introduced the popular Highlights of the week.

On Apr 25 2013, the fun hovercrafts were introduced and explained by the news, the legendary Hovercraft contest was announced by the news, being the 2nd contest in KoGaMa history. (the first being the make a christmas game contest)

On June 26 2013, Firefly and Dragonfly jetpacks were released and announced by the news.

On Aug 11 2013, Kogama papercrafts were announced by the news.