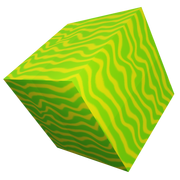 The poison block is a block different from all the others, by stepping on that block the player will die, his life will go lower and lower until you die, this block is often used in parkour,horror and adventure games.